The (grown-up) kids and I took a little beach break. Here’s what happened!

Last weekend I was lucky enough to take a four day break and head to Venus Bay with my kiddos. It’s the first time I have headed off somewhere with them all as an independent lady … and it was even nicer than I thought it would be.

Honesty, this sort of time spent together just driving, listening to music, hanging out and talking (rubbish and also big stuff) and snacking together and having mini adventures is just The Best. 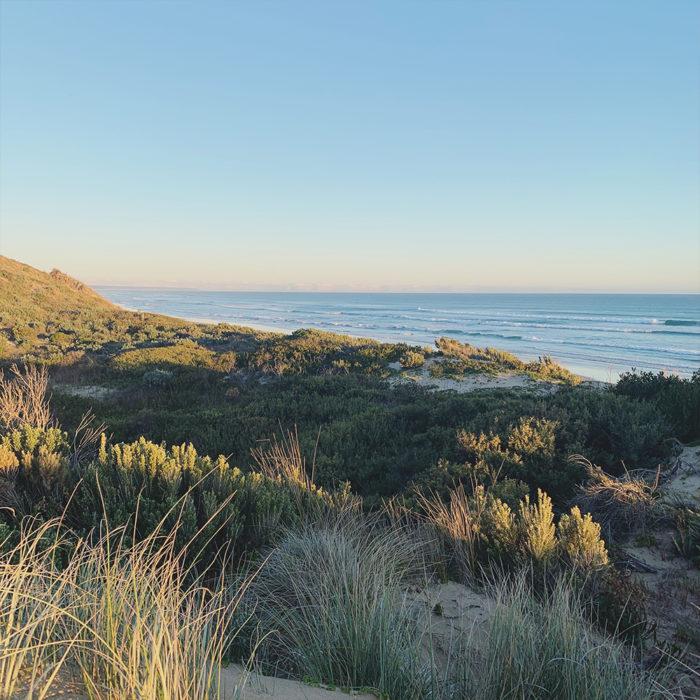 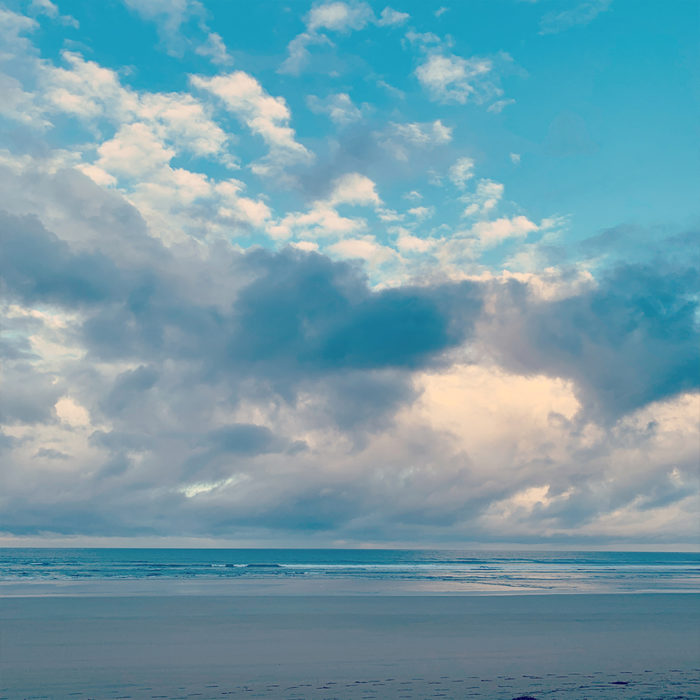 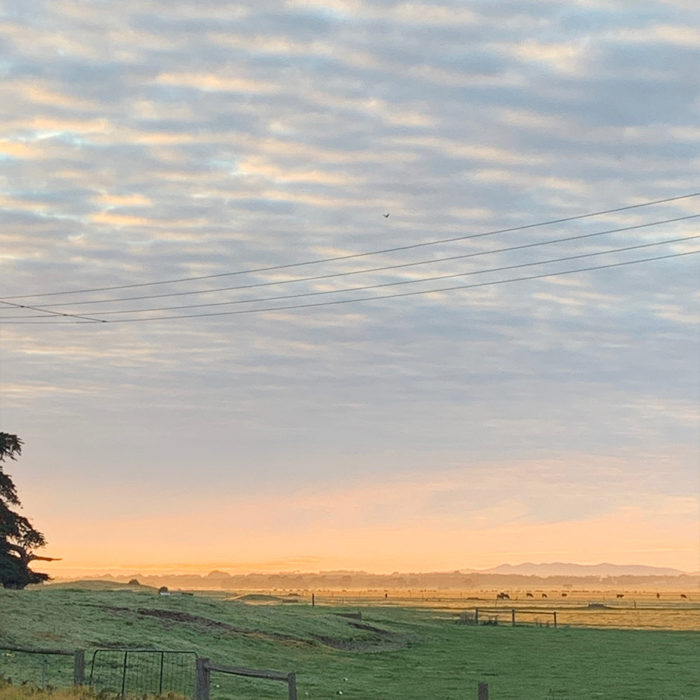 I have to say that I love Venus Bay.

We only went there once previously (in ye olden days) so it doesn’t have lots of old memories attached to it.

This makes it perfect for making new memories, in my book.

If you live in Victoria (or have visited) you might know Venus Bay as the beach with the pipi controversy. The locals have tried to protect the beach and surrounds – and the local ecosystem – by putting some sensible rules in place to stop outsiders coming in and taking way too many pipis from the beach. We didn’t take any pipis!

We spent our beachy days looking at the brilliant view across the fields to the windmills. Well. They aren’t windmills are they? They are wind turbines, I think?

During our four days we cooked a lot of simple and delicious food – including Stephanie Alexander’s famous cheesy toast – and drank gin and tonics and wine and cups of tea and coffee … and icy beer. 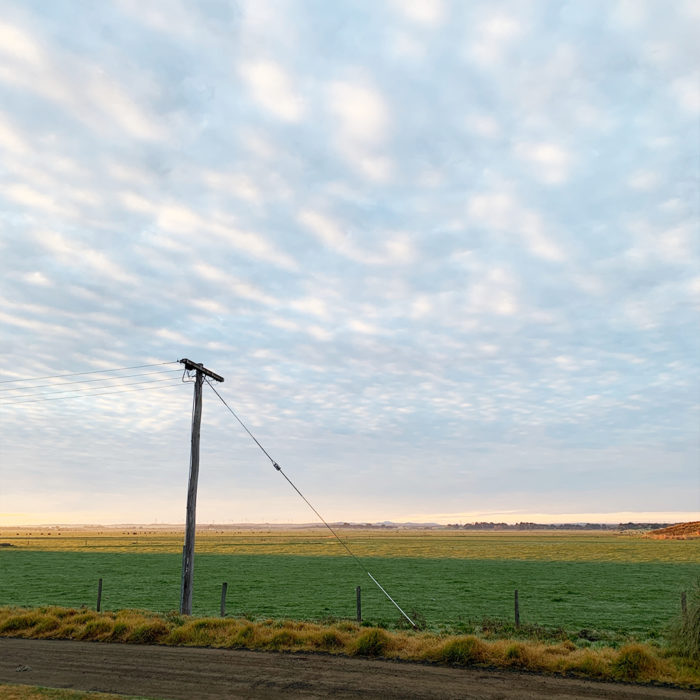 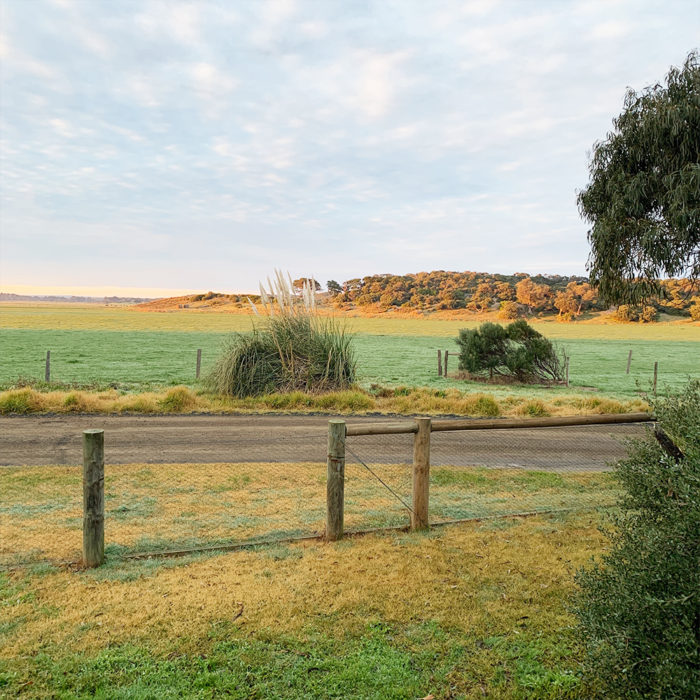 We stayed at a dog-friendly air BnB so that everyone could take their dogs along (which was brilliant and also chaotic.)

I woke up early every day, as is my habit and watched the darkness turn to light.

As the sun came up the crunchy, dewy, chilly blanket that was draped over everything slowly melted. Kangaroos, wombats and all kinds of birdlife came into view, and each morning a fox would steal across the paddock, ducking between the cows and disappearing into the coastal scrub.

I watched all of this from under a blanket on the couch, with binoculars firmly in place.

I know that foxes totally suck, but this one was not like a city fox. He was fatter and fluffier and a lot like the ones in storybooks. But yes. He was a bad, bad fox. I know this. That said the cows seemed to like him.

I also watched Love Island and crocheted and thought about reading a book … but didn’t.

The kids played board games – and I am not even kidding – for 12 hours straight one day. Trivial Pursuit was their game of choice and it was honestly the most charitable game you’ve ever heard, with lots of cryptic and not so cryptic clues to help each other along. 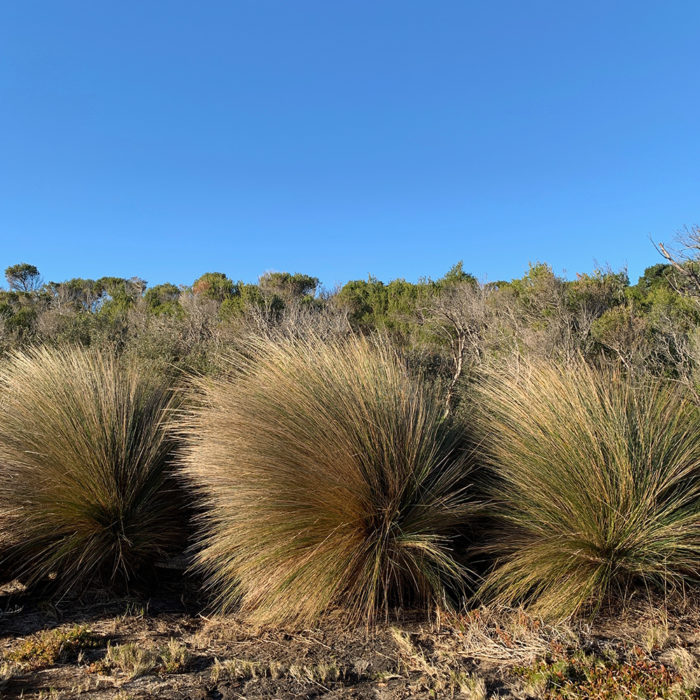 I took the dogs for lots of walks down muddy unsealed roads and they found the whole thing pretty blinking delightful. I also took them to the BEAUTIFUL beaches and around to the inlet where they ran off the lead and had the best time a dog could ever have.

We saw more kangaroos, a pelican, lots of beautiful birds and lots of discarded pipi shells. And also a dude pumping yabbies for bait in the distance.

Little beachy towns like this are often very quiet during the winter months, which makes it my favourite time to go. There were, of course, some locals still going about their business and some families who own holiday homes playing cricket in their front yards, but generally it was super peaceful and the very opposite of the bustle you’d find in summer. My idea of bliss, pretty much. 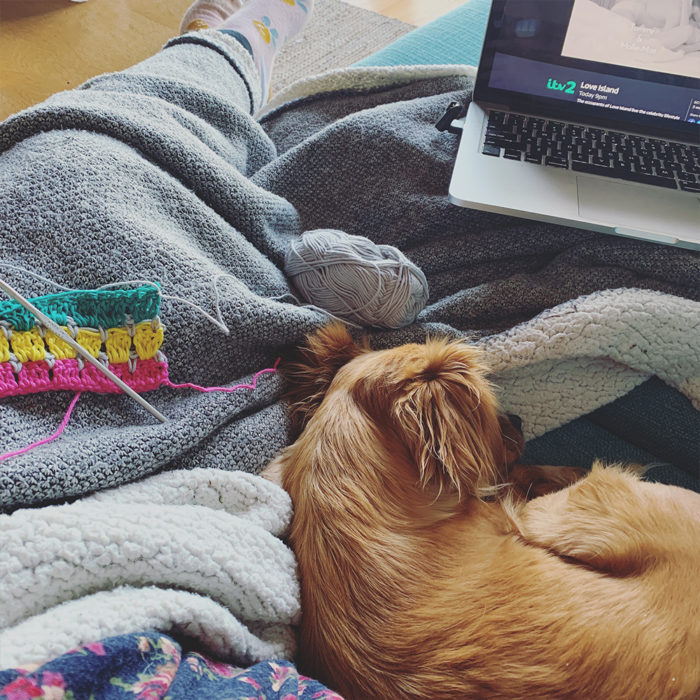 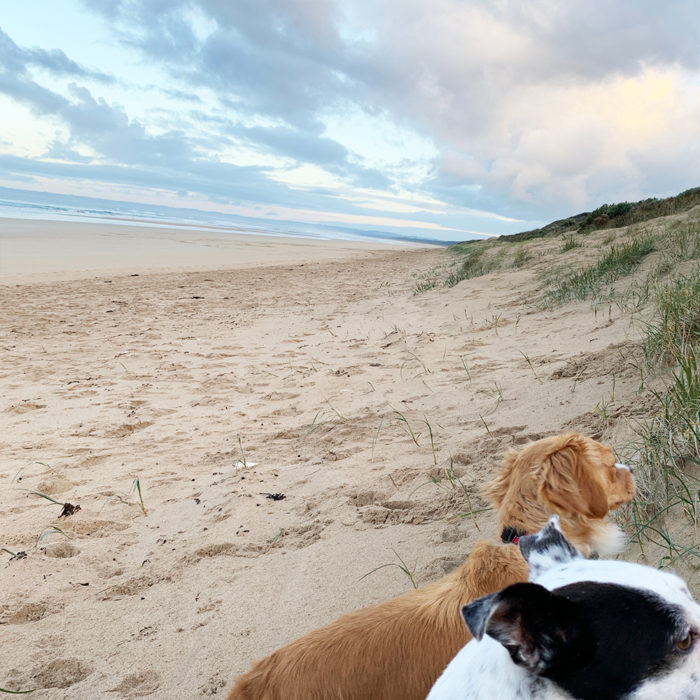 You know, I had forgotten how much a short break can literally blow the cobwebs out of your system and erase that full body tiredness that the usual life things can sometimes spark.

There is something about picking up shells and feathers, laughing at dogs, pulling on boots, rugging-up in cosy coats and trudging along quiet wintery roads and coastline with your favourite people that restores and recalibrates. 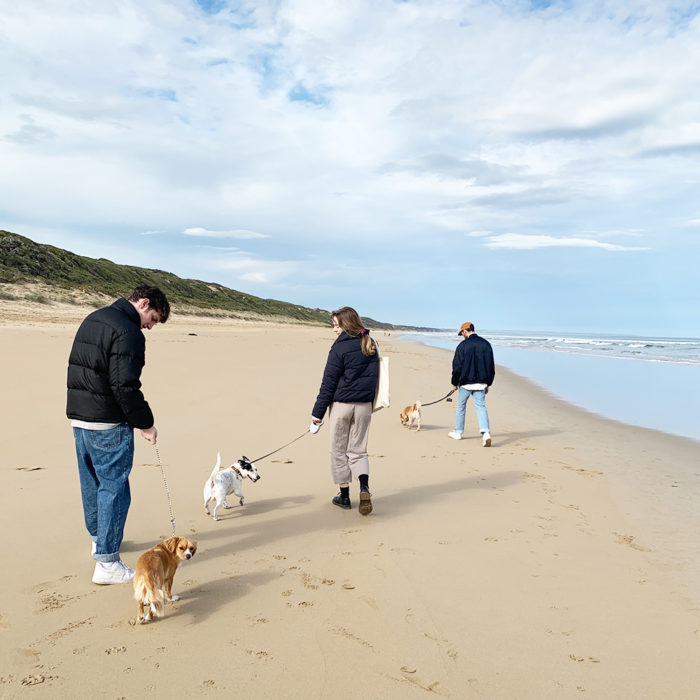 I don’t really have the resources to go on far-flung holidays and more and more I’ve been thinking about the wisdom of staying closer to home. (Especially after reading this brilliant piece.)

This chilly-cosy little break reminded me that ‘thinking small’ when it comes to taking time away has all kinds of brilliant benefits. 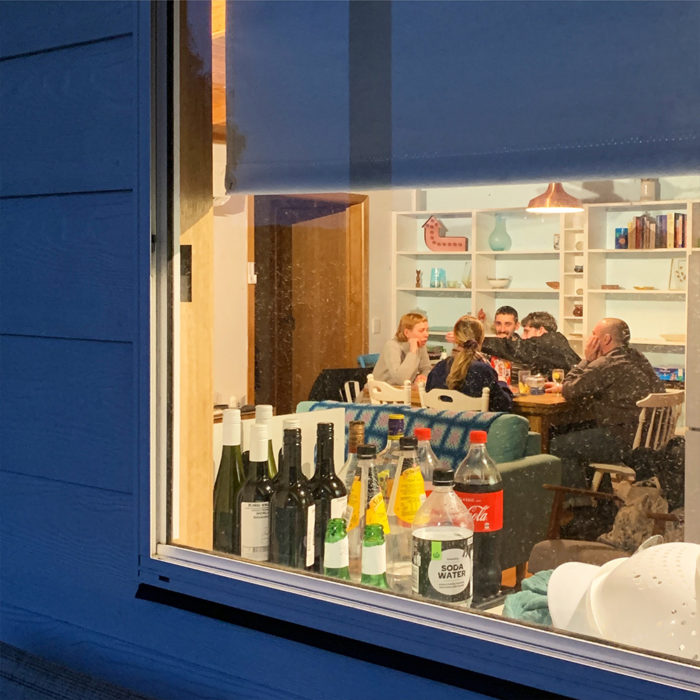 Some of the things we ate

There is something about beach holidays that makes everyone want to eat filling and comforting food. It’s always a bit tricky cooking in a strange kitchen but we were lucky because pretty much everything we needed was on hand. I did take my old Breville jaffle maker and one sharp knife, but that was it. (And there were actually good knives and a sandwich press at the house, which was a win!) 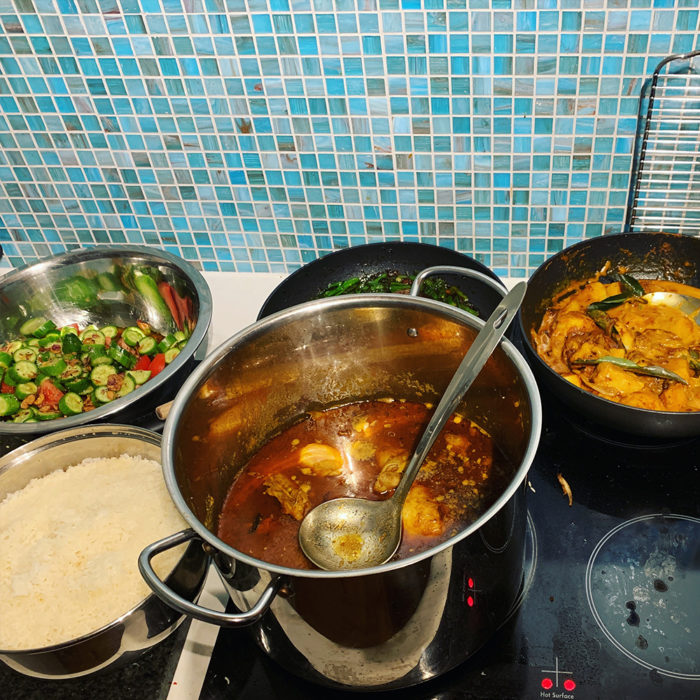 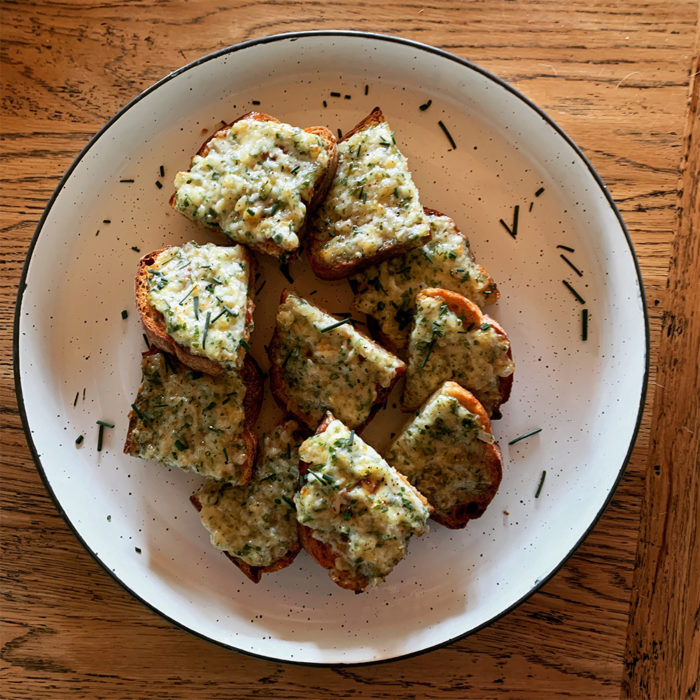 We stayed at an AirBnB called Far View in the First Estate of Venus Bay. It’s on a quiet road and I chose it because a view is just the thing to help everyone relax quickly.

The house was perfect for us. It sleeps eight and is not scarily charmless and box-like as some new holiday house can be, but super comfy, with brilliant heating, nice bathrooms and linen and towels provided.

The house has internet and Apple TV in 3 rooms, which I thought could be good if we needed to duck away from each other and the weather was too crap to venture out – as can be the case during winter breaks.

Luckily the weather was not crap. It was sunny and cold and beautiful with only a tiny bit of rain on one day.

Note that I found this house by trawling AirBnB and we paid full price for our visit. (Not sponsored! But do tell them if you book in because of this little holiday story! Maybe I can be a mini-break blogger now!!) 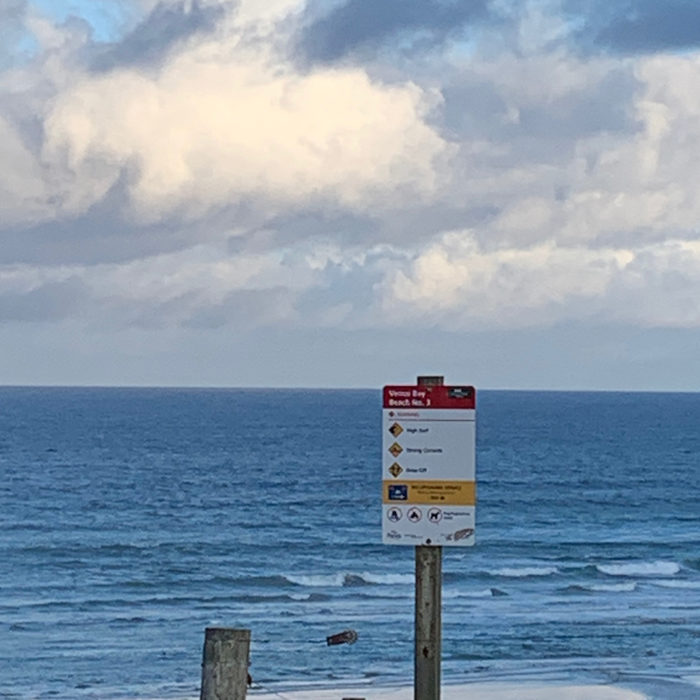 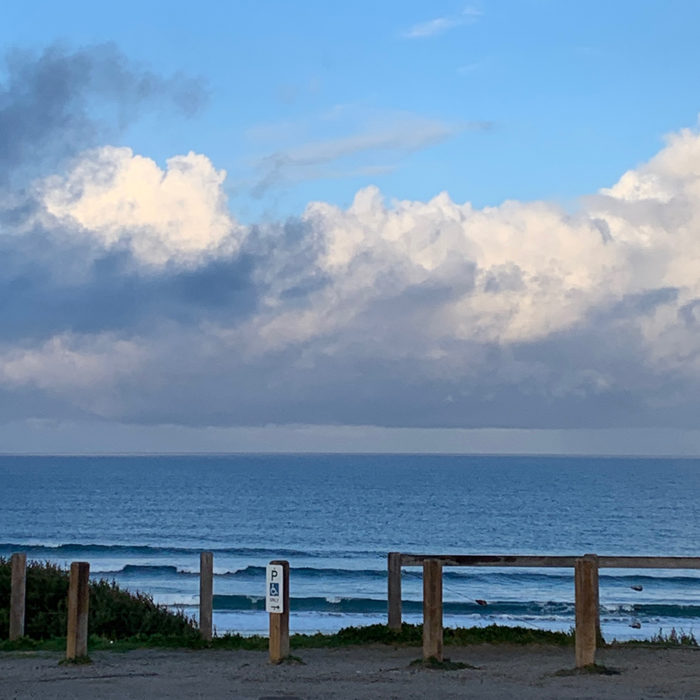 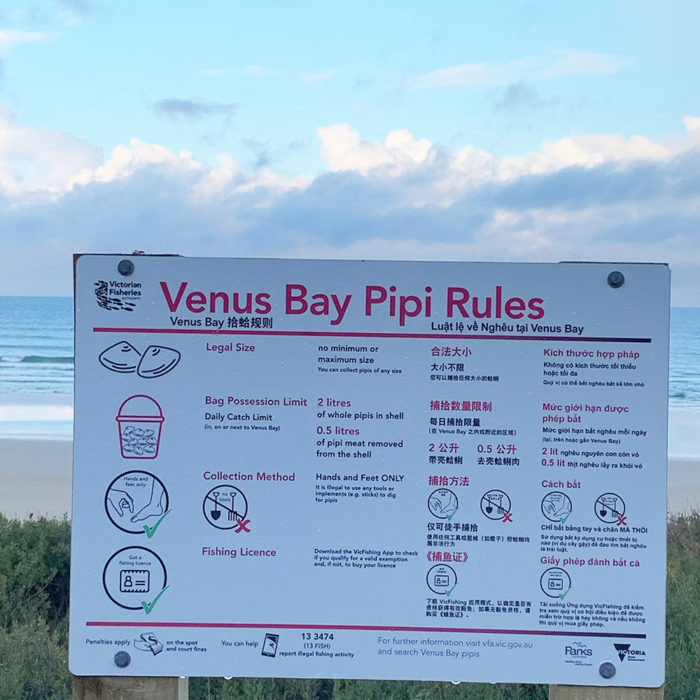 I love Venus Bay because it’s far enough from home to wind right down, but also has a little town with all the things you need (including a very cute op shop!) plus a pub and supermarket in the next little town, just a five minute drive away. I wanted to be away but not TOO away, if that makes any sense.

(Venus Bay itself has a chemist, a general store, a pizza shop, a couple of cafes, a fish and chip shop and a couple more shops.)

The coastline is jaw-droppingly beautiful here and the beach stretches for miles, more than long enough to walk out at least some of your worries. You can also easily drive from VB to Wilson’s Prom, Walkerville (Magic Beach!), Sandy Point and Inverloch (which had a great Japanese restaurant last time I was there)

There’s a little pub at Kilcunda (we drove down via the slower but prettier Bass Highway) which has a brilliant view out to sea. We didn’t have time to go there, but it’s on the list for next time, as is a bit more a look around that town and it’s foodie-looking shop and Shelley Beach.

On the way home we stopped to do more op-shopping and buy lamingtons because that is my nonnegotiable country town visit thing. Pink ones for me. Chocolate ones for Ari.

Maybe this will inspire you to book yourself a tiny getaway – with lamingtons and jaffles and kind games of Trivial Pursuit – too?