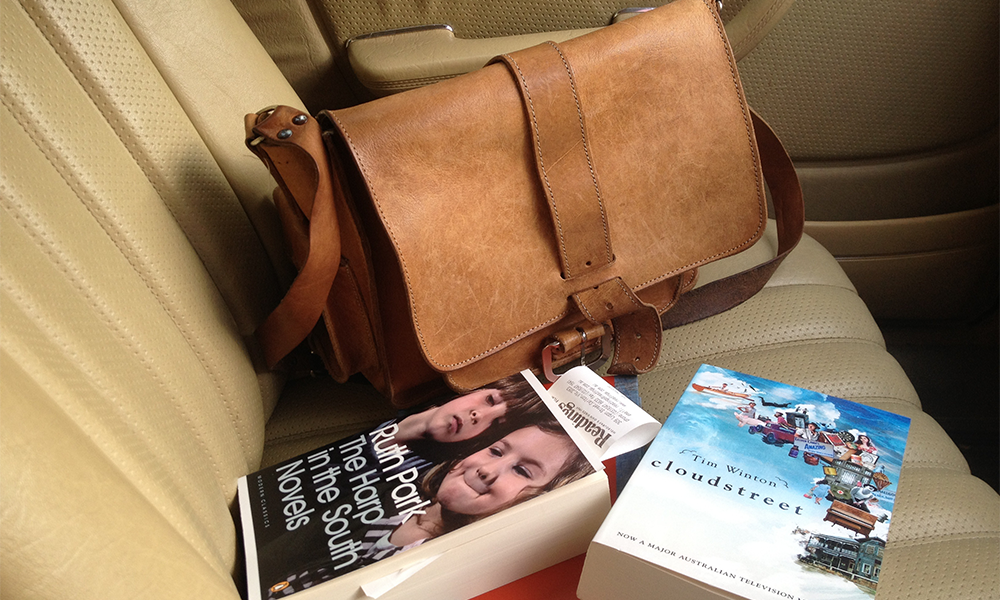 I’m in Perth! I’m at the Perth Writers Festival – which is the author-ish arm of the Perth International Arts Festival. I feel pretty lucky to be invited and I’m extremely, very much looking forward to the next couple of days.

I love doing this kind of thing. You get to meet other people who are brimful of clever ideas. You get to be in a new place and shake up your usual routines and patterns. You get to talk to people who are interested in your work (and often some who are not!) It’s sort of like being boinged about in a larger than life cocktail shaker, where the other ingredients are well-known people, awkward people, quietly clever people, mysterious people. It’s very stimulating (<– said in Lady Mary Crawley’s voice.)

Yesterday Beci and Michelle and I had a big walk and an even bigger dinner together. It was pretty great to stretch our legs and take in the streets of Perth. Northbridge seemed nice and we had went to a place where you had to press a button to order your food. You were then rewarded with speedy service and excellent crispy chicken, glossy and tender duck, crunchy green vegetables and fluffy rice. We wandered back through the Perth Fringe Festival events and got to chat about big and small things. Ace times.

I also went to the University of WA yesterday, fresh from the plane, to talk to Patricia Karvelas on Radio National’s Drive program. You can listen here, if you like. It was such a fun interview to do and I was particularly buoyed after spotting the Tony Jones sculpture Eliza emerging from the Swan River on the way there (from my taxi.) Tony is my ace friend Gemma’s dad, so I felt like Gemma was giving me a little encouraging wave (even though she is in Melbourne and I am here!)

Today I’m doing two sessions – a workshop in the morning called ‘Pip’s Creativity Shake-up!’ and then a session this afternoon with my pal Beci Orpin. And then a session on Sunday with Michelle Crawford.

I’m looking forward to all of them, because there is nothing better – after being shaken up in a life-size cocktail shaker of amazing people ingredients – than being in a room with people who ‘get’ what you are about and are fronting up to chat about your favourite things. There’s a friendly familiarity to it, which will be grounding after all that wide-eyed, wide-eared boinging about.

It’s funny, you know, because even though I said travel is a chance to switch up routines, I have actually woken up at the exact same time as I would at home. Then put on the ABC Breakfast Show, as I always do. Made a cup of tea, as I always do. Downed a litre of water, as I always do. Part of this is perhaps to pull myself into something comforting and familiar. Part of it is an attempted refusal to adjust to a new time zone because I have lots to do when I get back home to Melbourne and I don’t want to be sleeping in the whole bloody morning long.

Do you know what? I sat on the plane from Melbourne to Perth, next to a really nice lady called Vicki. I am not really a chatty type person on the plane, but it was a long-ish flight and when you are elbow to elbow with someone, it’s nice to try and make some kind of connection right? It makes the prospect of accidentally falling asleep on them a bit less forward. I asked Vicki where she lived in Melbourne, and then realising I might be overstepping, blurted out the suburb I live in. At the very same time she blurted out here suburb. IT WAS THE SAME SUBURB! In fact, Vicki lives around the corner from me and is not only a total book nerd, she’s also a total NUT for Malaysian food (after living in Malaysia for many years.)

We chatted about the beautiful surprise a colour plate can be in a vintage book of otherwise black and white text. We talked about funerals, feminism, history and family. We talked about her sister’s amazing book-filled home in Perth – she apparently has a READING ROOM. She also has a PROPER dressing room. AND she has three staircases with a radio perched on each one so that she can wander about and listen to her favourite Radio National programs, uninterrupted. Best of all, she has a WINTER BEDROOM! It just goes to show that it’s good to cast off the ‘Do Not Disturb’ sign sometimes and actually find out a bit about the person sitting next to you.

The other fun things that happened yesterday were that I met Clare Cunningham (who was wishing she could somehow lug 25 gazillion books back to Glasgow and noted that PERTH was her Winter bedroom) and I somehow hitched a ride with Magda Szubanski and Roman Krznaric after our radio interviews. It was interesting to hear their chatter as we wound our way through the streets of Perth. They are gentle, thoughtful souls.

Do you know what I am going to do now? Make a coffee, have a hot bath and read a little bit of Little House In The Big Woods. A TINY dose of far-from-home hygge before the day begins.

Hope you are well!

Got Something To Say?
Want to comment on this post? Got something to say on this subject? Ace!
You can head to my Facebook for further discussion!
(Or send me an email!)
Or you can also comment below.