“Once Georgie was diagnosed, I was relieved in a way, I think we were all relieved because finally we knew this was it, so we just embraced it. All you want as a parent is to have a happy child, for that child to be themselves.” – Greg Stone

If you live in Australia you have the very excellent opportunity to watch About A Girl via the ABC (or maybe you watched it live last night?!)

About A Girl tracks the life of 16 year-old Georgie Stone and her family – her mum Rebekah, her dad Greg and her twin brother Harry.

When Georgie was born she seemed to be a boy, but she soon let her family know that she was, in fact, a girl. So began a pretty epic journey to ensure that Georgie could realise her true gender.

Not only was this obviously a challenge for which the family were unprepared, they had to factor in the rest of the world’s attitudes to transgender people AND go in to battle with the family courts who ultimately oversee some of the treatments transgender kids need to undertake.

In consultation with an expert medical team from the Royal Children’s Hospital in Melbourne, and with the full support of her family, Georgie began her gender transition. She started taking puberty suppressors when she was ten and gender-affirming hormones when she was fifteen.

Georgie’s story is told with sensitivity and honesty. Greg Stone – Georgie’s dad – speaks really frankly about his own difficulties adjusting to who his child really was. Mum Rebekah discusses the weight of her own efforts to be the best parent she could be. Brother Harry reveals he was left floundering in the wake of his sister’s prioritised needs. And Georgie shares the bloody difficult reality of being different, being bullied and facing a future in a body she may not have been able to accept or love.

Transgender kids like Georgie are working against the clock, trying to access the hormone treatment they need before puberty kicks in and transforms them into the ‘wrong’ gender, by default.  Australia is the only country in the world that requires transgender children to be assessed by the courts to determine their competency to consent to gender-affirming treatment. 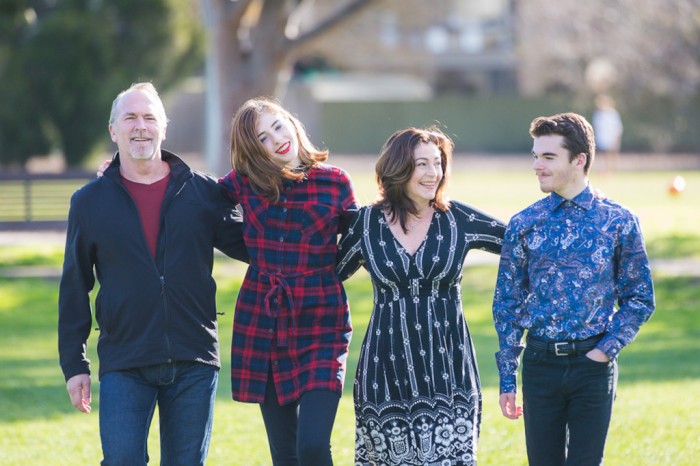 The ABC tells us that the system is so difficult to navigate – and indeed it’s out of reach of many kids altogether – that pre-teens and teens are resorting to buying hormones on the black market in an effort to halt puberty and transition into the sex they truly are.

In About A Girl, Georgie and her family repeatedly highlight this desperate ‘race against time’ and relate their own experiences searching for pro-bono legal assistance and dealing with courts. The Stone’s thankfully have a super-supportive medical team backing them up as they deal with these compulsory legal manoeuvres. (You might also have seen the same team in this program about Isabelle?!)

While there have been some changes to the way the Family Courts oversee medication for transgender kids, they’re really only halfway there.  Georgie is currently lobbying the government for a complete overhaul of the system in the hopes that these vital treatments can become more accessible for kids who need them.

Georgie and her ace family are generously sharing their experience in the hope that it will change other kids’ lives and make the acceptance of transgender kids and the path to transitioning so much less fraught.

It’s heart-wrenching that kids have to go through such difficult times just to be themselves. This shouldn’t be such a big deal and is certainly an issue for individual families and their doctors to expertly navigate. We most definitely don’t need the courts and playground bullies overseeing or opining on who our kids truly are. Nope. Uh-uh.

If you are able to watch the program, you really should. These are the stories we need to hear. So glad we have people like the Stone’s and the ABC gang to bring them to us.

Read more about Georgie, Harry, Rebekah and Greg (and the important work the gender services clinic at the Royal Children’s Hospital in Melbourne are doing) over here.
Watch ‘About A Girl‘ – I think it’s geoblocked for Australia. FYI. Sorry if it is!
Watch ‘Being Me’ – Isabelle’s story via Four Corners

Other good stuff on my blog:
Pip’s School For Slumpy Creatives : Lesson One
Pip’s School For Slumpy Creatives : Lesson Two
Win a copy of ‘Botanical Style’ by Selina Lake
My I Spy: Something Beginning With ‘A’
How To Make Choc Chip Brioche Buns
24 Non-Crap Things To Say To The Sad Person In Your Life
Make My Very Best Chicken Soup