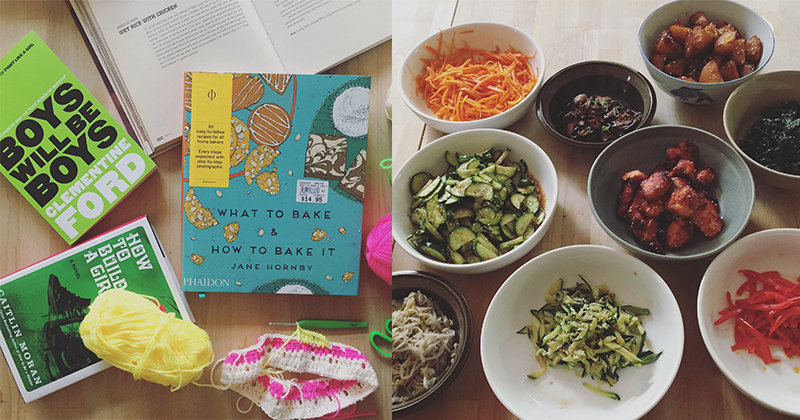 I have started approximately 122 blog posts over the last two weeks, but then irresponsibly let them flounder unfinished. It’s quite obvious that I am a monster. And also that I have been overthinking it.

This duly noted, I am going to start one more time, because I’m nothing if not persistent even though I am a little … unreliable around these here parts sometime.

I have been very distracted doing a lot of different things, many of which FEEL like they amount to very little, but indeed are actually a fraction of something bigger. Does that even make sense? I do not know.

Certainly I have been working a lot. Writing thousands of words a week about all kinds of things and sending them off to be edited and published. I’ve also been working on my book. And not sending that off yet because the deadline is quite distant at this point.

In the car, while not working, I have been listening to Caitlin Moran’s How To Build A Girl*  via Audible. It is freaking funny and utterly brilliant and every single time I listen I wish that I was a funny and natural and ultra-clever writer like CM. And then I wonder if other people have writers they feel that way about too … it’s a very worship-y and incredibly admiring and totally inspired-by, actually almost want to be them sort of feeling. Perhaps you have a writer you feel like that about? (Do tell me who, if so!) 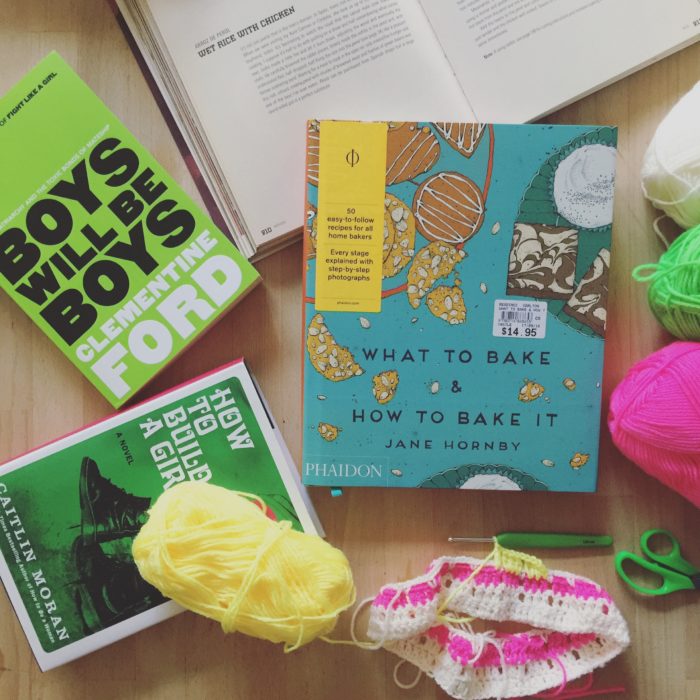 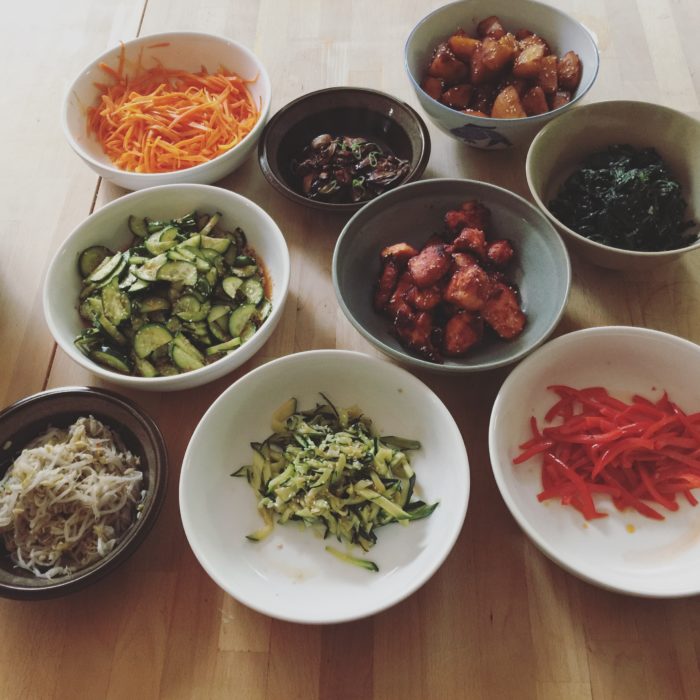 I’ve been making some pretty nice stuff to eat (like spicy asian-inspired things) as well as writing and admiring authors. This week I made these potatoes which were super yum and easy. And I made this carbonara, but at the last minute Ari and I decided it needed a slosh of cream (which some people will rake me over hot coals for adding). Later we decided it needed a very, very good glug of cream, so I am going to do that next time. Hate me if you like.

Also? I’ve made sorbet. Three kinds of sorbet. Raspberry. Lemon (with lemons from the tree down the side of the house). AND blood orange, with oranges from the market. The sorbets are all tucked in the freezer, getting their freeze on, and waiting for Sunday when my friend (vegan) is coming over to try them. (Except I only told her I made raspberry sorbet, so as to underpromise and over deliver.) 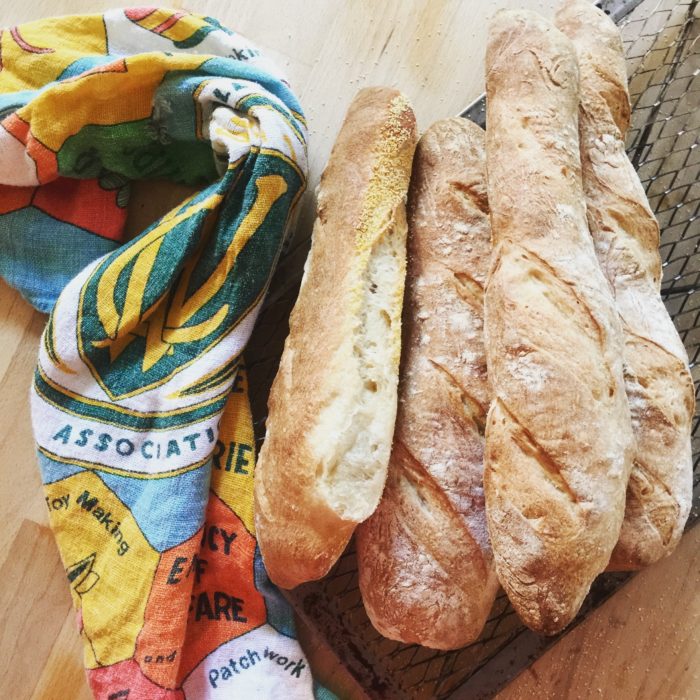 I’ve put my baguette-making (‘Sabrina’s Breadsticks’ from The Cook’s Companion – a recipe I have been using reliably for about a zillion years or so) on hold for a while, because I was feeling quite sluggish from eating so much baguette. Now that I am talking about them, though, I want to make some. Perhaps I will do that tomorrow. In the mean time we’ve been eating crumpets with peanut better. A bit less sparingly than the baguettes, so less of the slug feels, if that makes sense.

This morning when I was at the shops in Brunswick the ‘Order Your Turkey!’ signs were up. Can you believe another year has almost gone? I can’t. I also can’t believe that another Christmas is creeping up. It’s hard to know what to do with Christmas when your family has changed into something else. It’s hard to get it right, you know? I feel a bit nervous about it, and then I feel guilty for a) being nervous and b) possibly making my KIDS feel weird about a time of year that is meant to be fun.

Also today, I have been toasting sesame seeds and making sambal. Plus I went to Savers and bought a bag of Assorted Kitchen Things. Inside was: a melon baller, a flour scoop, two bottle openers, a pair of mini tongs, a pair of ice tongs, the smashy bit from a mini mortar and pestle (which is it called?!) and a tea strainer. It’s a sort of second-drawer lover’s lucky dip, pretty much, and all for $3.99 which I think is a total steal.

I’ve been watching the ABC Keli Lane series (three parts) on iView and joined the Facebook group, because it’s just a very confusing and interesting story and I’m keen to find out more. Perhaps you have been watching that too? And this weekend I’m going to watch the new season of Terrace House on Netflix.

I also watched some of the royal wedding last night, but it was mostly to catch a brief glimpse of the royal family. I was not super invested in it except I was because I did have a little cry at the happy couple and also felt quite worried that Jack Brooksbank was truly, actually about to vomit. Plus the bit with the ring not going on Eugenie’s finger was adorable. And also Fergie being her usual cheery self was brilliant … and the bit with the kids tumbling up the steps and jostling down the aisle too. And Meghan’s voluminous coat. *nods* *winks* 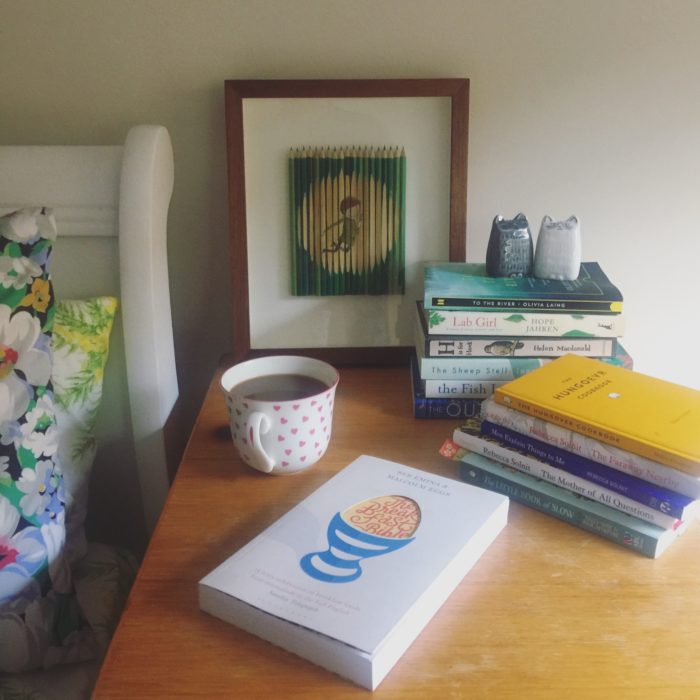 In other unrelated although still quite royal news signed up for HRH Virginia Trioli’s ABC best bits type email too, and got the first one today. It pointed me to several great stories, including one about Keli Lane and one about children who were adopted during the Vietnam War. Totally worth getting in your inbox each Saturday am, IMO. As is Loobylu Claire’s Small Batch List. Get on it.

On Thursday I was down at the shops and I went to a cafe to get a speedy latte while I was waiting for Ari to turn up. There was nobody in the cafe when I arrived, but a group of 4 people soon appeared – and rather than taking one of the many empty tables scattered about, they took the one right next to me. (Apologies if you already heard about this on my Twitter!)

Anyhow, I was all set to bristle with annoyance, because you often hear of people being annoyed by close-sitters like this (and rightly so if it’s in a cinema because WHAT MONSTERS), so I was stepping up to do my bit for that annoyed school of thought. But THEN I sort of thought. ‘LOOK. They might just want to be near the other humans. OR they are neatly adding themselves to my tidy gang, so as not to upset the rest of the empty cafe. It’s all fine.’ And I truly did feel that.

I hope you are well and finding treasures and good things in what can seem monster-ish at first.

PS: Sorry for the long and weird post, but this is just what I’m actually like. Let’s be honest about that.

*I bought a hard copy too. At Readings because it was on sale. They had lots more. In case you saw it on my Instagram and wondered why I was saying I listened to the audio book on Audible when I had the hard copy and thought I was a brazen liar. I’m not.

PPS: Sorry for typos if any. I am a bit tired. 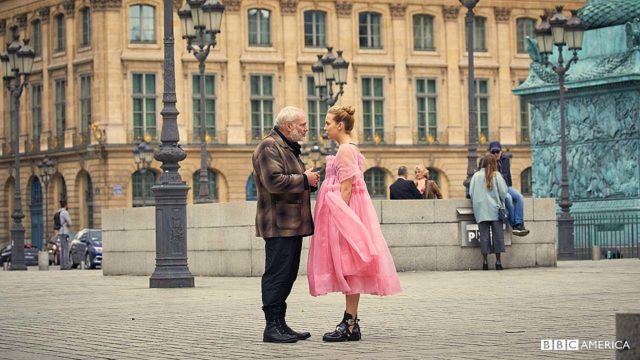 Taking Stock: October
What better thing to do on a sunny afternoon than…