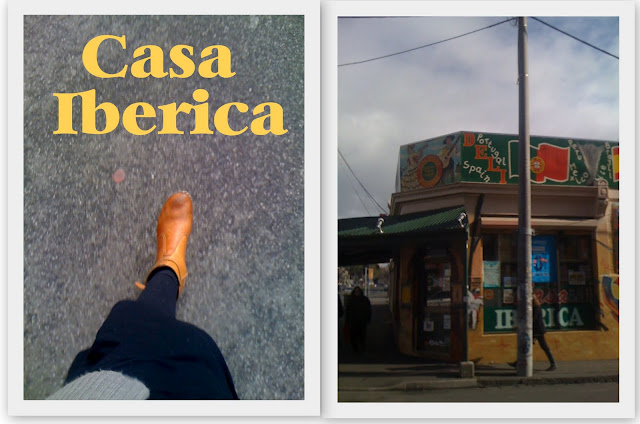 Hello!  So, today I thought I had an appointment at 10… but it was actually NEXT week at 10. D’oh. But that was good, because I got to go for a bit of a hike down the street and get some things for dinner.

I am cooking Chicken, Chorizo and Potato Quesadillas.  I am combining two ideas.  This recipe by Thomasina Miers (who I adore, adore, adore!) and a chicken recipe based on the Mamasita chicken.  I have the chicken marinating now… and then I am going to fry the chorizo and potatoes… and add them to the chicken (which I will simmer in the marinade for 20 mins or so.)  Here is how I do the chicken.

***************
Pip’s Mexican Style Chicken
This is really easy to make.  I get the chillis I need from Casa Iberica.
1 kilo of chicken thigh fillets, no skin, fat trimmed
To Make The Marinade
2 dried guajillo chillis : seeds removed and snipped into pieces with scissors
1/2 chipotle chilli (I use the chipotle which are tinned in adobo sauce…. and I add a teaspoon of the sauce)
1 tablespoon of ground sweet paprika
1/2 tablespoon of ground cumin
1/2 tablespoon of dried oregano
1 tomato, chopped roughly
1 red onion, chopped roughly
2 cloves of garlic, peeled and chopped
juice of one lemon
2 tablespoons of olive oil
1 tsp of salt
1 tsp white pepper
Put all these ingredients in a food processor and pulse until it’s a nice red paste.  You can use a mortar and pestle for this if you like, but I shake all the crockery out of the cabinets if I do.  Don’t do that, will you?!  Scoop it all out into a bowl and throw your chicken in for at least 2 or 3 hours to marinate!
To cook the chicken, heat a slosh of olive oil in a nice, big heavy based pan.  Plonk the chicken in and arrange it neatly  in one layer.  Pop a lid on and simmer over a medium low heat for 20 minutes.  You can turn up the heat at the end if you want a bit more colour on your chicken.  Cut the chicken into pieces while it’s still in the pan and toss in the pan juices.
You can season it with black pepper, coriander and a squeeze of lime to serve!
We have this in tortillas, usually, with lots of fresh salsa, guacamole and crunchy greens!
It’s good with spiced rice and corn on the cob too!
If you want to get a bit more Mexican, don’t forget Daniella’s ace Mexican cookbook. And for even more deliciousness you can watch Tommi Mier’s show here.  She also has a rad Mexican cookbook which is a companion to her telly show.  NICE!  Did you know that Thomasina won UK Masterchef in 2005?!  Maybe you know her from the Wild Gourmets?  She’s totally ace, and has gone on to such great things, hasn’t she?!  She just had a baby, too!   Aww, cute. And clever.
(BTW, did you see those chicken burritos on Australian Masterchef, when they were in New York?! OMG! YUM!)
xx Pip
Hurrah!
5 Comments

previous post
:: Snug As A Bug…
I love these pretty and simple geometric necklaces by Snug.…