That One Time Posting About Dolly Magazine Made Me Question Everything 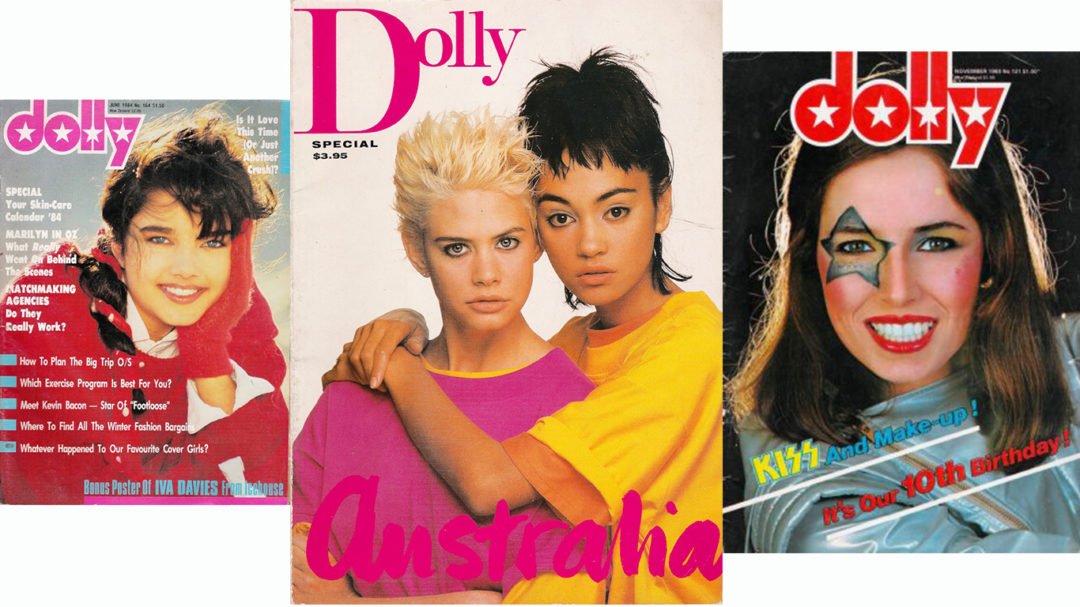 A while ago I posted sadly about Dolly Magazine’s demise and boy did it GO DOWN in the comments of my Facebook post.  It was on like Donkey Kong and I am still recovering. Let me explain. (It’s really a post about talking, listening and understanding/liking each other more.)

To tween me, a girl living in the far north-west of WA with no commercial TV, Dolly was a lifeline to the world and signalled that all kinds of things were possible, if I ever got out of that tiny town. (We later moved to Canberra, which felt a bit the same, although cold!)

This was in the early 80s, when there was no Photoshop, the girls in Dolly looked a lot like the girls I went to school with, the magazine with packed with fledgling Australian fashion and music AND Dolly Doctor was actually the only place you could find out ANYTHING about bodies – unless you read your Mum’s Cleo/Forum or something…

But back to Dolly.

I read pretty much every article – even the grumpy ones by Stuart Coupe – paying attention to how they were structured and the language used.  I knew I wanted to be a writer or a journalist right then and there.

I got started. I wrote poem after poem after poem and sent them in to Dolly’s ‘Poet’s Corner’ page. Twice I feverishly flicked through a fresh issue to the poetry page outside the newsagent to see something I’d written, now published. In print. ME! Gasp. 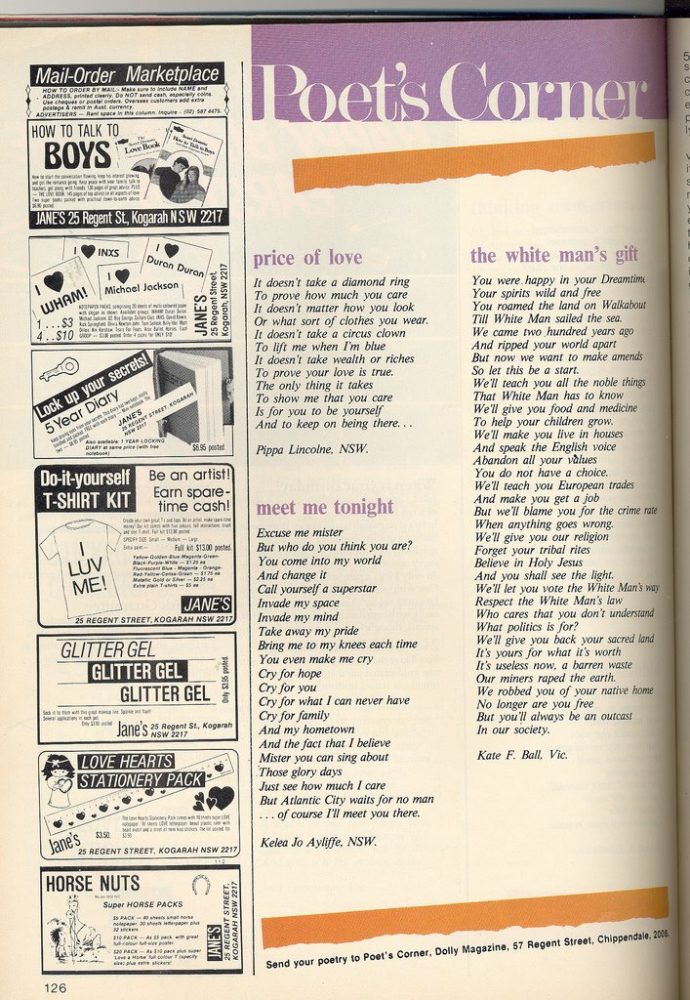 When Dolly ‘died’ a year or whatever ago, I wrote about it in bittersweet terms on my personal Facebook profile. I wrote about how Dolly gave me my first professional break when I was about 12 years old AND showed me that a dream that didn’t involve cyclones and dudes in cars and getting pies smacked out of my hands outside the cafeteria were indeed possible. (That last thing truly happened.) I also know a lot of 40+ women who got their start in publishing and writing thanks to the magazine and they commiserated about those long-ago glory days with me.

What followed – after my update on my own FB profile about how Dolly gave me my first break – was a debate on how crap Dolly Magazine was. Like, a full on tussle between pro-Dolly/anti-Dolly/old-Dolly-loving women in the comments of my post. I was, apparently, a bit of a non-woke monster.

Now I get it. I do. Some people had a different experience. Women who are younger than me didn’t know what Dolly was like back then. Not only that, they’d grown up in a fairly media rich culture (unlike me!)

They had their own less great experience with Dolly – 10 or even 20 years later. Also they were not interested in my sentimental recollections. Instead they were going to LET ME KNOW that Dolly was part of everything that was wrong with media for teens.

Which is fine. Like, GO FOR IT. Views, please have them! Yesssss.

Because we were dealing with Dolly Magazine – a publication that did veer very far from its roots in its final years – it was probably easy to assume that I was being ignorant or glossing over real and valid feelings of disappointment some women had with the magazine.

Maybe people thought I didn’t understand how important diversity and healthy role models are to girls and women? Perhaps it was a kind of feminism policing? I am not sure, but I figured anyone who really knew me would know that I am a champion of women and girls. I am a feminist and valuing the role early 80s Dolly played in the lives of the girls I knew (and me!) does not undo that.

My Dolly, the early 80s Dolly, was a godsend to me and the kids I grew up with, in terms of information and education. Dolly did not deliver impossible beauty standards or airbrushed models back then. In fact, it was kind of dorky and relatable and I took from it what made sense to me.

I’m not saying it was perfect, but it was ALL WE HAD, the only magazine that was speaking to Australian girls and teens, written and edited by (mostly) Australian women – and that made it perfect enough.

What this whole episode highlighted, for me, was the fact that social media comments are very ALL or NOTHING for many and how little understanding there can be between humans and how one comment can light a fire under a story and things can veer into unexpected and confusing territory very quickly. Territory where nobody really gets heard or considered…

Not only that, people seem to be primed for disappointment/judgement and ready to point the finger and unfriend or block people when they get a sniff of a differing view (often without actually digesting what’s going on.) It’s a sort of one strike and you’re out approach and I’m so not liking it.

Just to be clear, I don’t expect people to come over to my side of the fence, but nor do I expect to be dismissed for having a different experience, in a different time and place. I like to chat over the fence, but in this case, my story didn’t matter, it was invalidated, even though it was told in my own little corner of the internet.

So what can I take away from this confusing situation? Instead of getting out a tiny violin and feeling misunderstood or maligned?! How do I turn this all around?

Firstly, that the fact that people feel disappointed in womens’ magazines is very real, important and emotional issue. I feel terrible about that. I highlighted an issue that was much bigger than me. How can I address this issue myself? Acknowledge those feelings. I have felt them too. I don’t buy womens magazines – haven’t for many, many years – because I don’t like the way they commodify and shame women. I also try to promote media that ARE doing a great job – and to promote womens’ great work myself. I’m trying to do the best I can not to perpetuate the bad and to promote the good, pretty much. People are RIGHT to get mad about this issue.

Secondly, acknowledge the fact that womens’ magazines have let many women down doesn’t mean that my experience/my friends’ experience of Dolly Magazine all those years ago is invalid or hypocritical. (I don’t think!) In this case, I think there’s a generational divide at play.

Thirdly, I have to accept that sometimes, strong feelings about issues are so big, the only way for people to deal with them is to say their piece and then cut you off, in disappointment and frustration. Humans are just like that, sometimes. It’s just a thing we have to accept. It helps to look closely at what happened and try to see how things played out for them, even if it was based on misunderstanding and a different lived experience. It can feel bad, but that’s just the way it is. Maybe, some day, fences can be mended and the impressive conviction of passionate views will spark firm friendships.

And finally it’s good to slow down and adjust our approach Facebook/social media commentary and responses.Consideration, context, compassion, connection – then comment.

Have you ever been involved in a misunderstanding on social media?