:: 5 ::
Hiya Howaya?
I am okay!  Yesterday we had the nicest day. It was Father’s Day in Australia…  and we were all a bit sleepy after a night of wild winds and flooding across our State.  We decided to have an inside kind of day, so we headed to Piedemontes for supplies and then to the DVD shop and then back home to put on a cassoulet and eat leftovers from Saturday night’s dinner party and watch movies on the couch under blankets.
We watched I’ll Remember April with Pat Morita first.  It was really great. Ari and Cam and I loved it. It was all about four boys who encounter a Japanese soldier who was accidentally left behind (on the Californian coast) by a submarine… and how they deal with that and some of the issues surrounding World War 2 from a kid point of view.  Lots of discussion about war and peace and racism ensued, which was really interesting.
And THEN we watched Moby Dick. I have never seen it before, nor read it.  Wow.  I was rivetted. What an amazing, tense, powerful film.  Pretty violent in parts (fake whales being harpooned), but just totally awesome, I think.  What have I been doing, not seeing Moby Dick? Sheesh.
I did a bit of research afterwards (as is my habit!) and I found out that Moby Dick was based on the true story of  Mocha Dick.  And also that artist Tristin Lowe made a GIANT Mocha Dick white whale, with some painstaking stitching and a LOT of wool felt. Wowee.  How cool is that?!  Click the image below to see it super huge : it is totally worth the load time.
Now, enough about the Dicks.  How was your Sunday?  What did you do?  What do you think of Moby Dick? And Mocha Dick? Do you think it is an awesome idea that whales can triumph over hunters?  And have you seen I’ll Remember April? 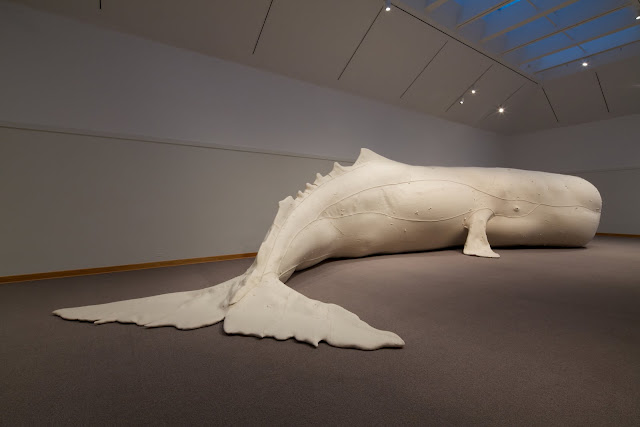