Eat How Good Is Pip-Life

How Good Is? Episode 1 : Korean BBQ 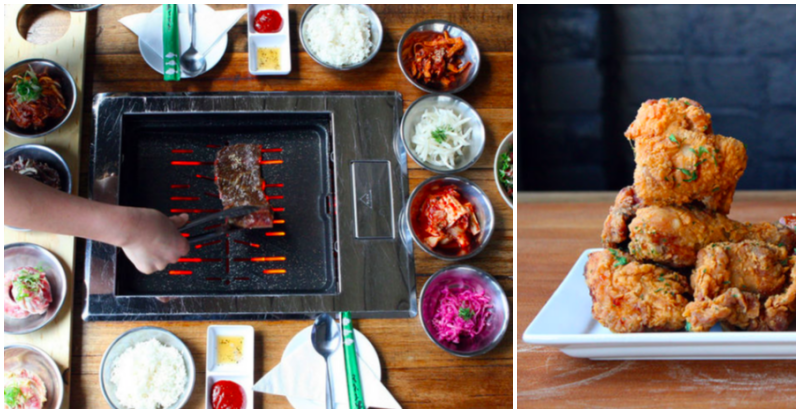 In today’s very first episode of How Good Is? I am quite keen to talk about Korean BBQ.

We went out for Korean BBQ on Tuesday night for Ari’s birthday (he turned seventeen!) and I was super surprised at how great it was.

I’d never been to KBBQ before, it was Ari’s choice, and when we all finally managed to descend on the correct Richmond eatery and settle ourselves into our very sunny seats, we could not have known what a lovely dinner we were about to have.

I mean… we suspected, but it was actually extra good and has indeed sparked a whole new column here, about Good Things of all persuasions.

For one Korean BBQ is not just about the meat. I actually like the little side dishes and rice even more than the meat. If you were a vegetarian, you could have vegetarian-ish BBQ, like tofu or tempeh, I am sure.

I won’t talk too much about the meat, in case you are non-meaty… so let’s talk about the side dishes.

How good are side dishes?! I like them a lot. I’m heavily into condiments AND side dishes, truth be told. I could sustain myself on both.

Our side dishes included mixed pickles and cabbage kimchi and some kind of Korean potato and maybe daikon? I think that’s what it was. Also, onion. Chunks of onion, which sounds bad, but was actually very, very good.

They gave us little bowls of rice, chilli sauce and some other kind of sweet vinegary stuff… and a big bowl of salad which we all descended on.

Then a staff member BBQd our chosen things as we all chattered and acted like The Very Hungry Hooligans that we were.

(They had those steel chopsticks which could take someone’s eye out, too, but no injuries, which was great.)

Rin ordered a jug of beer – Brunswick Bitter, which I actually would highly recommend – and everyone had an icy glass, except for me. I had half a glass because I can not feel okay about driving, otherwise. I get really anxious, and feel like I’m tempting fate and being a criminal.

If I have a full glass of anything alcohol-based and drive, I am a delinquent. I have imaginings that the world is a giant martini glass, dream sequence-style. Drink-one-drink-and-drive-dream-sequence-me is hurtling around inside that martini glass, trying to get somewhere, but making no progress, clinking like a noisy ice cube, my badness on show to all.

In this illogical and nonsensical anxiety-ridden scenario the police are in the giant martini glass too. With their breathalyser machine. Lucky them. They know I had three mouthfuls of wine and are whizzing around after me, semi submerged, driving a green olive.

It doesn’t end well for anyone and is not worth the bother. I’m crazily literal about ‘drink driving.’ It’s not about the feeling boozy, it’s about feeling like I am doing the wrong thing. Drink-staying-at-home, I’m good with. Drink-taxi-ing is okay too. Drink-getting-a-lift is fine too. It’s just that I can’t get behind the wheel myself.

Max said ‘It’s because you are a good person’, but I’m not sure if that’s the truth. I think it’s because I am an anxious person. Possibly because of the green olive, too…

So now that you know just how neurotic I am*,  let’s get back to the KBBQ, post half glass of beer.

I had a Diet Coke and felt instantly bolstered and like less of a criminal-to-be.

We kept serving ourselves morsels of rice and morsels of kimchi and morsels of those delicious potatoes. They were slippery suckers, those potatoes, elusive to the shiny chopsticks, but we persevered because they were that good and each of us wanted to eat more than the other.

We kept chatting and snacking, helping ourselves to BBQ bits as we went, and the kids were being slightly nuts and it was just really nice. I found time to interject something impassioned about Dominick Dunne and John Dunne and Joan Didion and the kids were polite about it and did not roll their eyes a single time.

Eventually, we had eaten every bite and the sun had swung lower in the sky and stopped sunburning us on one side of our faces. I had stopped complaining that our table was sticky, by this stage, too.

I paid our bill – after three loud men paid for their fried chicken and beer, which is another thing you can have at KBBQ – and then we hugged each other goodbye and all wandered off in our various directions, because a lot of us live in different houses now.

How weird is… it when your own children live somewhere else? WITH NO PARENTS.  Poor orphans. Sob.**

But also,  how good is Korean BBQ? Do you ever go? Or have it at home? Please spill the beans!

PS: Blog With Pip is back on sale – by popular demand – but be quick!

*I never said I was normal!

**Later one telephoned to ask me how to buy bed sheets, so that made me feel a lot better.