Have You Seen Iris? 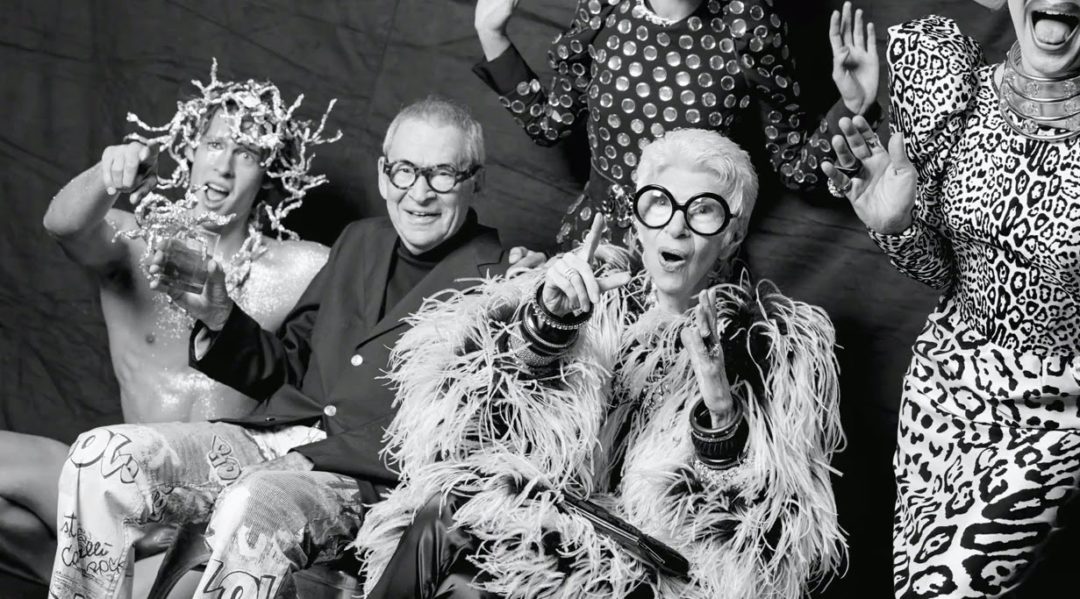 Last night, my friend Gemma and I went to see the movie Iris (about fashion icon Iris Apfel.) When I say last night, I mean yesterday afternoon, really, because we went to the ‘old lady’ session at 5pm (to see an ‘Old Lady’ movie! Snap!)

Firstly, let me sing the virtues of my psychic abilities (i.e. guess-ability.) I guessed/predicted that there would be 8 people watching the movie at this particularly Nanna time. When we walked in there were SIX patrons already seated, with Gem and I rounding it off to the as-predicted EIGHT as we sat down. I AM SO MAGIC.

Secondly, let me sing the praises of eating popcorn and drinking wine at 5pm. (Note – Gemma was not drinking wine because… growing a baby!) After we left I noticed that everyone else and been drinking wine too and that Gemma was really the only upstanding citizen in the room.

Thirdly, it was so nice to see a movie at that time of day. 5pm is normally a kind of weird-dead-transition time in our house. Dinner is being sorted and people are shifting from one part of the day to the next. It was nice to mark a normally busy/shifty time with something interesting and inspiring.

Now about the movie. Have you seen it? It’s wonderful. I loved sneaking a peek into Iris’s life with her adorable, gentle husband Carl. It was amazing to hear about their life together – one of travel and romance and collecting. They founded a business called Old World Weavers which created reproductions of 17th century fabrics (it seems to be called Stark Fabric now) and Iris also worked as an interior designer. Together Carl and Iris helped dress some of America’s most important rooms – most notably The White House, but many others too.

Iris’s true passions were adventuring and collecting, though and the film shows some amazingly great footage and photos of her trips. She could not help but gather mementos from her travels with Carl and as she grew older, this became a full-blown obsession. I won’t tell you too much, because it’s at the heart of the movie, but it’s so interesting to see their collecting progress (and if you look here – and watch the film – you can see how they shifted from a rather over-the-top maximalist style to something WAY beyond that!)

The film mainly centres on Iris’s fashion collecting (although she doesn’t call herself a collector.). She’s amassed an amazing archive of fashion and costume garments/accessories from all over the world and has a possibly unsurpassed passion for fabric and garment design.

I don’t want to spoil the film for you, so I won’t tell you much more than that (except to say that you should watch the film, because it’s pretty inspiring to see the colours/prints/textures and how Iris wears them – and the theatre of how she gets dressed.) 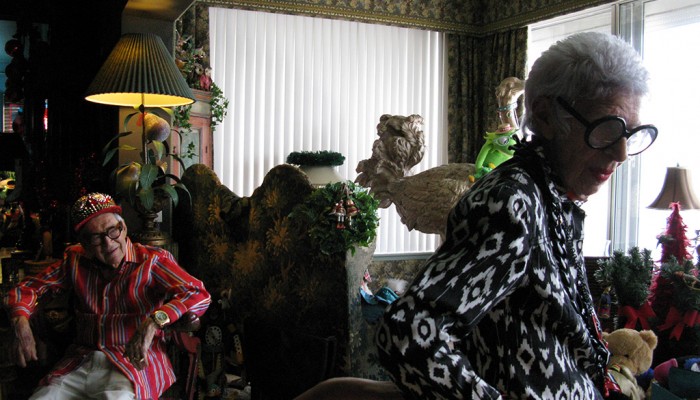 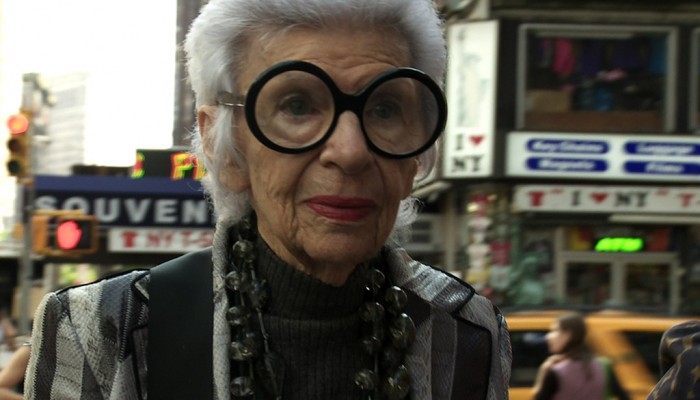 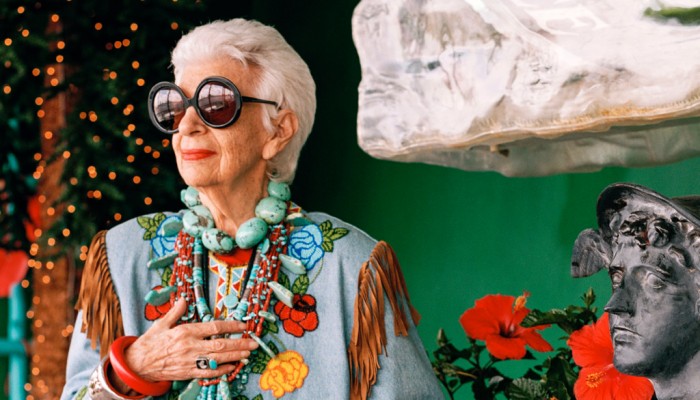 I really loved Iris’s attitude to so many things:

On plastic surgery:  ‘I’m very opposed… unless God gave you a nose like Pinocchio or you were in some terrible fire. Some very important people I know have come out looking like a Picasso. And for what? Wrinkles? You still end up with scrawny old hands.’

On being pretty: ‘I’m not a pretty person. I don’t like pretty – so I don’t feel badly … Most of the world is not with me, but I don’t care.’

On current fashion: ‘…people wear uniforms. Maybe there are just more people walking around and so you notice, everything is very homogenized. I go out in New York and I think, boy, you can look at someone and pretty much determine their ZIP code. Everyone seems to want to conform. I wonder, are they all just button-pressers, on the Internet all day long? I don’t know. Look, being an individual takes effort. Most people are pretty lazy. And that’s OK!’

Shot by Albert Maysles – who has made many films, most notably, perhaps, Gimme Shelter and  Grey Gardens – Iris is more fly-on-the-wall than deep-diving biographical pic. We see how Iris lives and works – and her sweet relationship with Carl – but we don’t find out very much about the Private Iris, her DEEPER motivation (apart from a passion for collecting, teaching and inspiring others to step out of the box.) It’s mostly about the Public Iris, following her along to styling consultations, exhibition planning meetings, archiving sessions and home shopping channel appearances.

That said, I really liked this film! I loved the colour and the wit and the kindness of it all. I loved the sound of beads clunking and the garment-box tissue paper shuffling. It made me want to know more about what made Iris. I have been doing some research overnight, trying to get to the bottom of things a bit more. I think maybe that’s the sign of a great film? If it shares a glimpse, gets you excited and sets you on the path to find out more?

(I still want to know more about the Private Iris! So nosy, I know!)

Have you seen Iris?!

Also on my blog:

Make a tangy, chewy lemon slice?
Ace days ahead
We moved house!
Learn some cool stuff with me
How to be a penpal to a child in detention
I’m a mentor in the Etsy Creative Courage Challenge
Some observations on people’s (often weird) online behaviour
Ten nice things to do for the favourite people in your life
6 Comments 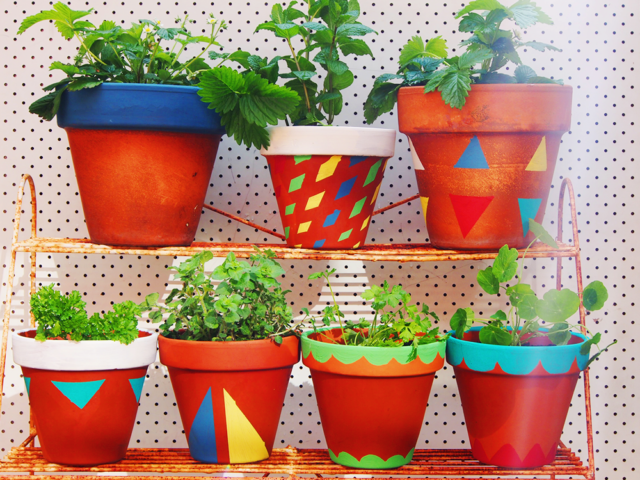